Home » »Unlabelled » Viralfunnyjokes: COWBOY MAKES THREAT IF HE DOESN’T GET HIS HORSE BACK, THEN REVEALS HILARIOUS TRUTH

Viralfunnyjokes: COWBOY MAKES THREAT IF HE DOESN’T GET HIS HORSE BACK, THEN REVEALS HILARIOUS TRUTH 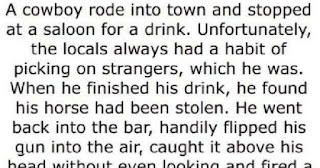 A cowboy rode into town and stopped at a saloon for a drink.

Unfortunately, the locals always had a habit of picking on strangers, which he was. When he finished his drink, he found his horse had been stolen.

He went back into the bar, handily flipped his gun into the air, caught it above his head without even looking and fired a shot into the ceiling.

“Which one of you sidewinders stole my horse?!” he yelled with surprising forcefulness. No one answered.

Some of the locals shifted restlessly. The man, true to his word, had another beer, walked outside, and his horse has been returned to the post.

He saddled up and started to ride out of town. The bartender wandered out of the bar and asked, “Say partner, before you go…

what happened in Texas?” The cowboy turned back and said, “I had to walk home.”

A guy was admitted to the hospital and he fell in love with the nurse.

She used to take care of him and very nice to him. Always checking up on him and giving him extra attention compared to other patients. Therefore, the guy thought that the nurse was into him as well.

The guy was shy and couldn't ask the nurse out on date. But after he was discharged, he somehow managed to get the number of the nurse and messaged her: "Hi, I'm the patient you looked after. I've been thinking about it and I think you've stolen my heart".

The nurse didn't reply for two days and the patient was sure that he won't be getting any reply from her.

Then out of the blue, she replied: " Whatever you are accusing me of is not true. We only took one kidney out".